During the 2022 NMUN Conference, the two topics addressed by the Human Rights Council were, first, “Promoting international human rights to protect against discrimination based on sexual orientation and gender identity” and, second, “The impact of unilateral coercive measures on the protection and enjoyment of human rights.”

On the first issue, Venezuela’s position is quite simple. Homosexuality is neither persecuted nor illegal in Venezuela. Same-sex marriage has been on the parliament’s agenda for years, but has always been overshadowed by other issues and therefore left to the side. This may be due to the fact that the Catholic Church has quite a large influence on the Venezuelan government and population. However, President Maduro has announced that his party is in favor of legalizing same-sex marriage and wants to introduce it soon. Accordingly, our position during the conference in New York was to be in favor of same-sex relationships but not to push it too much. Venezuela has no laws on gender identity and it is difficult for people in Venezuela to officially change their gender, let alone take any gender confirming measures. This is what Venezuela, and so we as delegates, are trying to ignore by focusing more on same-sex marriage. In general, our tactic was to be as neutral as possible in order to cooperate with both progressive and conservative countries and not antagonize them, because Venezuela does not have a strong opinion on this issue and does not want to lose potential allies for other issues.

What Venezuela lacks in interest in the first issue it makes up for in the second. Venezuela is strongly affected by unilateral coercive measures, especially from the United States. Venezuela’s oil exports and food imports are severely hindered by various sanctions. During the pandemic, Venezuela had virtually no access to medical protection measures, such as masks, protective gowns, gloves, etc. for their hospitals, let alone for the general population. They were also denied access to medication and vaccines. Venezuela’s bank accounts in the UK were frozen, so Venezuela had no money for further action. In addition, Internet access in Venezuela is very poor, as they are denied access to American satellites. This meant that children and young people – if they even had access to devices with which they would be able to access the internet – could not participate in virtual classes because they did not have any internet connection. Therefore, we as Venezuela were very interested in clarifying the legality of unilateral coercive measures (unfortunately, international laws are very vague on this) and making international criminal procedures more efficient and attractive to resolve disagreements between countries through legal means rather than coercive measures.

During the first session in New York, we were unfortunately outvoted, resulting in topic one being discussed first, which usually takes up the entire conference. Due to the nature of the topic, we were unfortunately unable to take a leading role in the negotiations, but our delegation did act as a mediator between factions, among other things. We actively worked on two working papers and were signatories on the other two papers. Of course, it was not always easy to distinguish one’s own opinion from the opinion of the country one represented, but in the end we succeeded quite well in representing Venezuela in the Human Rights Council. Three of the four working papers were finally merged into a single paper through a lot of work and compromise. And both final papers were adopted as resolutions at the end of the last session, which we are very proud of. Although the papers could not generate sweeping new policies, it was still a great concession by all participating states to respect and defend the fundamental rights of all people.

The United Nations Environmental Assembly (UNEA) is a UN committee composed of all member states. For decades, it has acted as a forum for member states to work together to tackle the world’s many environmental challenges. In contrast to other committees, the work is relatively harmonious. The world community is aware of the environmental problems – even if they do not always do what they promise. Faced with the historic tasks of the 21st century, it was an honour for my committee partner, Tom Webb, and me, Julian Lotz, to consider today’s solutions to avoid tomorrow’s problems.

On the 1st April, over 200 delegates representing 106 nations filled the prestigious green room of the Hilton Hotel. Finely dressed women and men readied themselves for the challenges of the coming days. The tension was palpable, this day had finally come after six long months of preparation. In the morning we jogged in Central Park and now we stood here as delegates from Venezuela while the seconds ticked by until the start. We asked ourselves what topic would be chosen and what would we spend the next few days debating and struggling over? The choices were between Reducing Marine Pollution, including Plastic or Implementing a Circular Economy to achieve the Sustainable Development Goals (SDGs). Both were worthy topics, each representing a pressing global problem, with significant interlinkages. We, as the delegation from Venezuela, decided to vote for the circular economy, primarily because the actual UNEA had recently made pathbreaking progress on tackling marine pollution. Right from the start, there were enthusiastic speeches and heated discussions on both issues. In the end, the international community decided by a narrow majority in favour of topic 2, the circular economy.

Three full days began. Speeches were made, discussions and negotiations were held, partners and compromises found. Member states began to form blocks comprising common interests, such as region of the world or ideological perspective. In order to protect Venezuela’s interests as much as possible, my partner and I joined two different blocs. During the days, one became aware of the immense value of having a committee partner. “Secret information” about the activities of other blocs could be exchanged, support was offered in difficult times and mutual help was given. Without a partner, this exciting, yet very exhausting experience would not have been half as enjoyable and bearable.

In the end, the delegates had 7 drafted resolutions on the table. Now it was time for amendments. As a delegation from Venezuela, we did not agree with everything and did everything in our power to get amendments passed. In the end, all 7 resolutions were adopted by the international community. If this had been the reality, it would certainly have been another important step towards preserving our environment. But despite the largely harmonious working atmosphere of the UNEA, and taking into account the simulation, I think we fell short of expectations. And it is at this point that it becomes clear how incredibly difficult it is to find solutions with so many actors and interests – even though the issues were less confrontational. This makes it understandable why there are only small steps in real assemblies and why the accusation of unambitious solutions is justified but difficult to change.

At the beginning of the days, I had looked with slight dread at the intense days ahead. How could I muster enough energy from 8 in the morning until half-past ten in the evening? Looking back, the days went by far too quickly. It was sad to end this wonderful time with all the new contacts and experiences. But as an added reward, this experience was crowned with an award for our UNEA delegation’s position paper. What a great ending to this unique and unforgettable time!

1 in 20 people all over the world is considered an international migrant. The more than 280 million migrant all over the world contribute tremendously to the development of their sending and receiving states, but migration also comes with many challenges. The International Organization for Migration (IOM) has assisted millions of migrants since it emerged more than 70 years ago with the goal to promote humane and orderly migration for the benefit of all.

“Migration and racial discrimination” and „Access to preventive healthcare for migrant workers“ were the two bang up-to date topics on the floor for our IOM committee simulation at NMUN 2022.
Lea Deubner and Lydia Michalek had the honor to represent Venezuela in this committee. Of course, we had prepared intensly for the conference and worked hard to find out, which interests Venezuela has regarding these topics. Venezuela is one of the main sending countries for migrants all over the world and the massive migration flows from Venezuela affect especially South America. We therefore found that Venezuela cares about its people in other countries and can take an active stand in discussions about both topics.

At the beginning of the conference on Sunday, different countries and non-governmental Organizations (NGOs) presented their arguments on how the agenda should be set. In between, there heated discussions took place. It was clear that all countries had interests on the floor that they wanted to be heard. There were good arguments for both agenda topics, as both are highly relevant and intertwined. When we voted in the late night on the setting of the agenda, there were many votes for both topics, but one topic had the majority of votes: Topic II, “Access to preventive healthcare for migrant workers”. 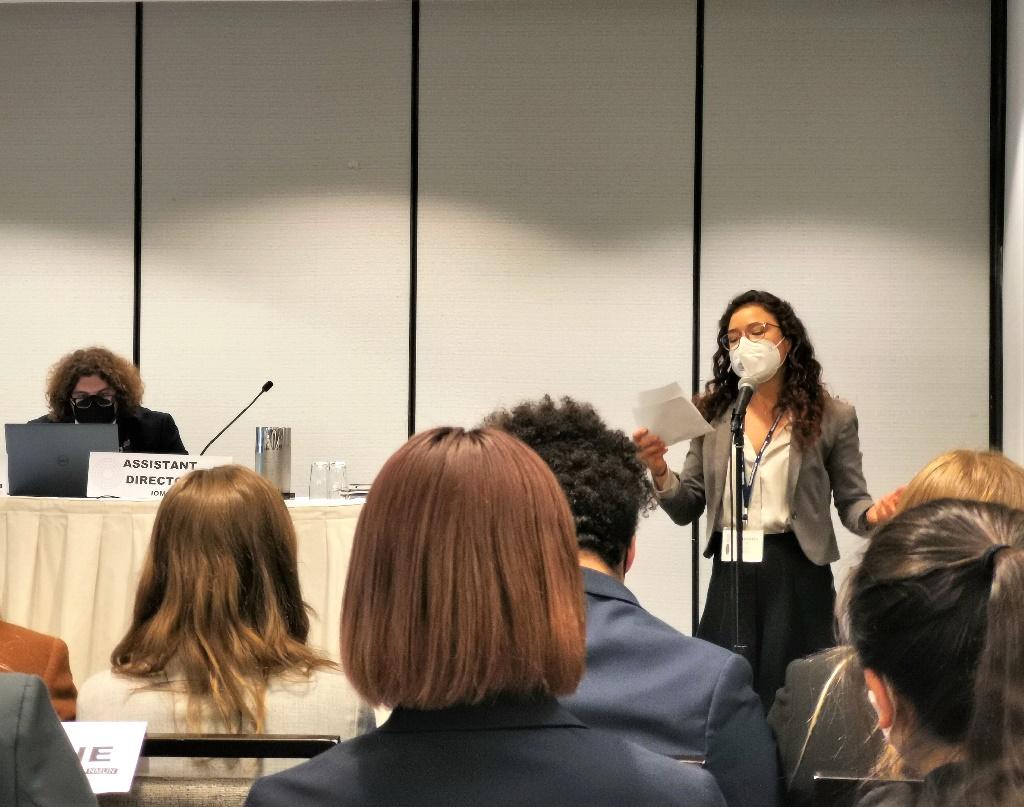 After choosing the topic, speeches and negotiations by all IOM members followed from Monday till Wednesday, full of innovative ideas. A lot of countries, such as Peru and Belgium, talked about the need for more research and good data collection. Other countries, such as Egypt, put a focus on empowering female migrant workers. Israel and more countries encouraged to reduce language and cultural barriers. Many of those suggestions were in line with the goals that we have set for Venezuela. For example, Venezuela is part of the Universal Health Coverage Partnership (UHC-P). Therefore, we encouraged to improve access to preventive healthcare for migrant workers by promoting UHC all over the world. Also, in light of the COVID-19 pandemic, we urged to provide vaccinations for migrant workers and more.

Following the different national priorities and international relationships, around twelve working groups formed, that focused on single topics. We as delegates of Venezuela engaged in the speeches, discussions and focused on participating in two working groups, that were collecting ideas to improve female migrant workers health care, improving education of migrant workers, reducing cultural and language barriers and on improving especially mental healthcare for migrant workers. In both working groups we were able to partner with countries from the South American region, such as Guatemala Ecuador. 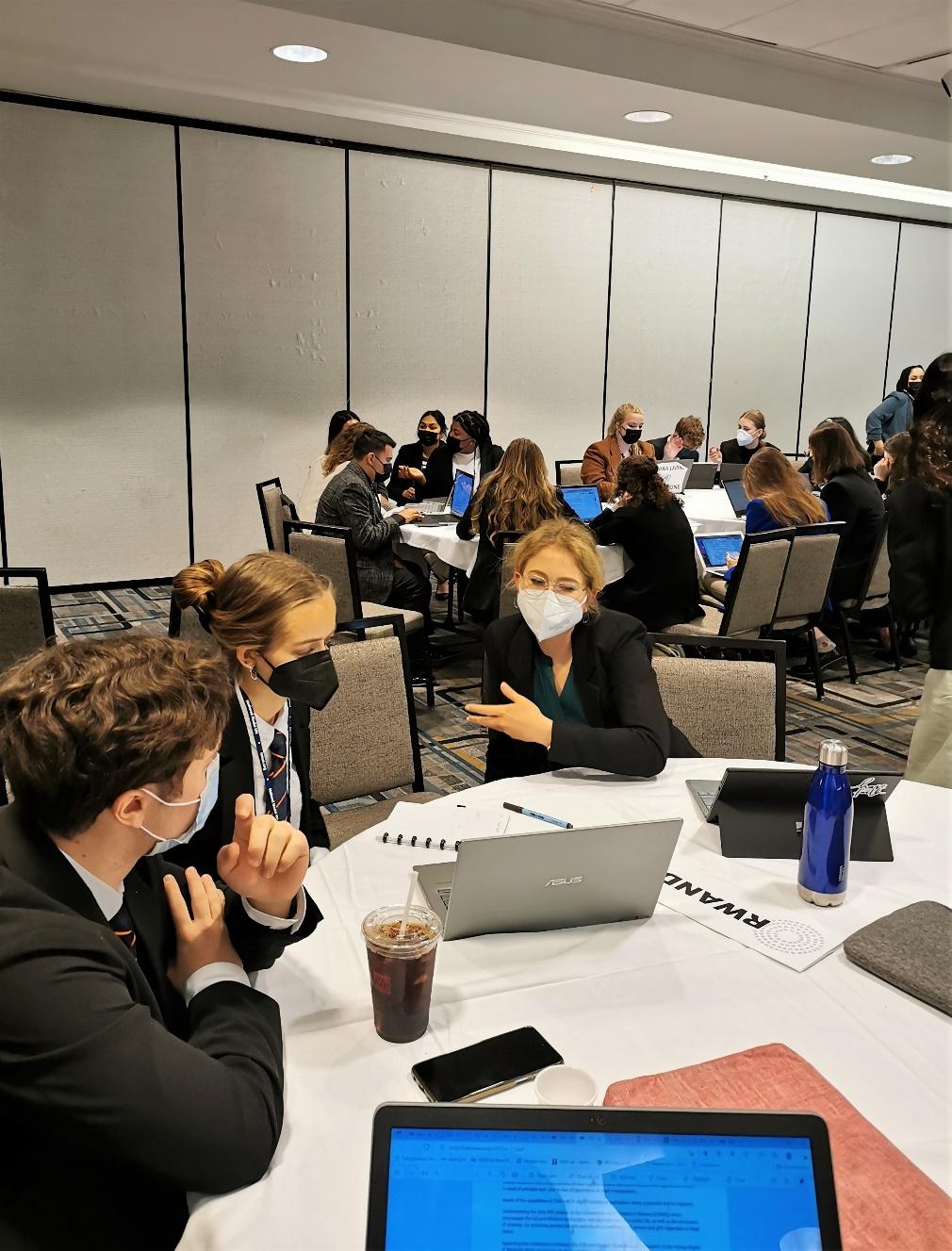 At the end of the conference, working papers of different groups were merged and turned into draft resolutions. Friendly and unfriendly amendments by different countries were made and suddenly it became visible that even though before there was consensus that “all countries wanted the best health for the migrant workers” there was discord about practical solutions. As in the “real IOM” we thought. Hungary for example even said provocatively, “The best migrants are those that do not come”. Most countries disagreed, including us. In all the discussions, our committee was able to find common ground between the different nations and we adopted six diverse resolutions. For us, these days were a very good educational experience that helped us to better understand international diplomacy and campaign for human rights in the context of international migration.